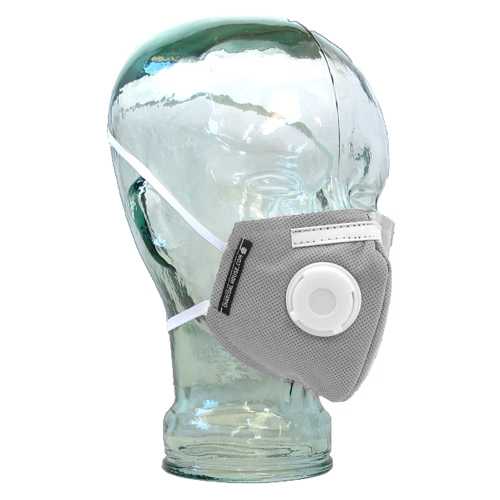 SAME PRODUCT but a NEW STYLE and COLOR! CONTOURED TO FIT UNDER THE EYES AND GIVE MORE BREATHING ROOM.

Add to Wish List Add to Compare
Related Products
Check items to add to the cart or
Details
Technical Data
Pure Non-Scents® Ag+ Activated Carbon Cloth Face Masks let you breathe inside when breathing outside is unpleasant, obnoxious or down right unhealthy.
The Pure Non-Scents® Ag+ CHARCOAL FACE MASK protects against virus outbreaks (this includes coronaviruses) as it is specially impregnated with silver. Applications are numerous, from hospital workers, homemakers, athletes, those in environmentally risky conditions, smoke allergies, sufferers of Multiple Chemical Sensitivities (MCS), travelers, wherever fresh clean air is not available, the Pure Non-Scents® CHARCOAL FACE MASK can purify the air for you to breathe safely.
Activated Charcoal works in military chemical masks, NIOSH respirators, commercial smoke eaters, and it works in Pure Non-Scents® Face Masks too!!

***It should be standard equipment for all contaminated site inspection and cleanup crews - such as those who lived or worked near the GULF OIL SPILL.

To extend the lifespan, place the mask in an airtight container such as a sealed glass jar when not in use. Write on the mask or jar the beginning date to help you keep track of how long it has been in use.

Leaving on a jet plane, heading out into rush hour traffic, visiting sick friends, why not tuck one of these Pure Non-Scents® Face Masks (with activated Carbcloth™ nano-technology) into your travel kit, glove compartment, or purse.

"Thank you! My sister, who suffers severe Multiple Chemical Sensitivities, has just been on her first airplane journey in over 20 years. Your masks helped tremendously. Thank you!"

Silver PNS Face Mask - A special version of the Pure Non-Scents® Hg+ CHARCOAL FACE MASK for people handling mercury, such as metal processing, chemists, dentists, and hygienists. The Hg+ mask has been developed with 100% Activated Carbon Cloth sensitized to adsorb mercury vapor. It also has the addition of a one-way valve to give improved breathability.

Carbocloth™ outperforms regular granular imbedded carbon for a few reasons.  Because Carbocloth™ is micro-pourous, it will adsorb 8 - 20 times faster depending upon the type of odor/vapor molecule. It will also adsorb down to a much lower concentration, equating to a cleaner air stream.

Longevity: if kept in a air tight environment, the masks will last indefinitely. As for actual useful lifespan that varies for each application. In moderate air filtration applications, it is recommended to change masks every three months.

To demonstrate Carbocloth's™ effectiveness on "breakthrough times", the chart below outlines a few of the odors tested. The table identifies a range of smells and the concentrations at which the human nose can first detect them. The chemicals used are those actually found naturally in the products that you identify from their characteristic smell. For example Butyric acid is found in vomit. A sample of Carbocloth™ (8.24” x 12”), will continually remove that particular smell for 473 hours (20 days) and still have 63% of the cloth still active.

Note: These smells are in concentrated form from the time the test begins, versus an application such as a pet bed that would accumulate smell over time. If not exposed to a continuous concentrated smell, the difference would add weeks to the overall sample lifetime.